Wikipedia has an article on:
Barack Obama 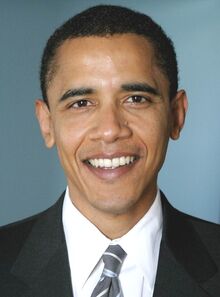 Barack Obama is the current President of the United States. He was born on August 4, 1961 in Honolulu, Hawaii. He was the junior senator of Illinois from 2004 to 2008, and has served in the Illinois Senate from 1997 to 2004.[1] He is the first black presidential candidate to be nominated by a major political party (the Democratic Party) and the first to be elected.[2] Obama was a member of the Democratic minority in the 109th Congress, during which he supported legislation providing gun control, as well as controlling public involvement in how federal funds would be used.[3] In the 110th Congress, he collaborated upon and created legislation with regards to lobbying, mitigation of global warming, prevention of nuclear terrorism or nuclear war, and US Military benefits such as scholarships and necessary medical treatment.[3] Obama is an expert in law, and has taught constitutional law from 1992-2004 at the University of Chicago Law School. Obama graduated from Columbia University and Harvard Law School, with a major in political science and specialty in international relations.

Obama supports raising the minimum wage, as he says will benefit working families. He favored the increase of the minimum wage from $5.15 per hour to $7.25 per hour[4], and has said that if he becomes president, that he will raise the minimum wage to $9.50 per hour by 2011, index it to inflation, and increase the Earned Income Tax Credit to help families afford necessities.[5]

Barack Obama supports universal health care and believes that all people should have adequate medical treatment. While attending a conference with Families USA, a health care advocacy group, he stated that, "I am absolutely determined that by the end of the first term of the next president, we should have universal health care in this country." He has said that it is wrong for 46 million people in the USA to be without health insurance, when the USA spends more than any other country on health insurance, with $15 billion of tax money helping the uninsured.[6] He has also said that he will "bring down premiums by $2,500 for the average family." [4] His political advisers have said that the $2,500 reduction, besides direct savings, also includes the average family's share of reduction in employer provided health insurance premiums and the lowered costs for government health programs such as Medicare and Medicaid.[7] He has also said that he will be cracking down on employers who have not given employees health benefits, will be requiring employers to make contributions to health care plans, and will close loopholes allowing employers to get away with not providing health care. He believes that increasing eligibility and lowering costs for plans will help people obtain necessary health care.

Retrieved from "https://democrats.fandom.com/wiki/Barack_Obama?oldid=3193"
Community content is available under CC-BY-SA unless otherwise noted.